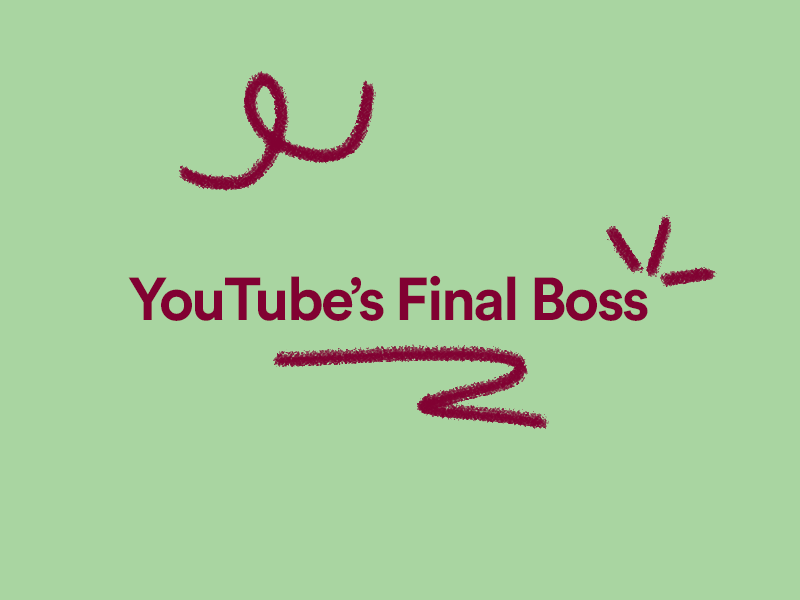 The old white man might be YouTube’s final boss battle.

During a period where traditional media has been on an indefinite pause with every major film and TV production running around and trying to figure out who sat on the damn remote, new media has been thriving. Outside of binging old episodes of FRIENDS on Netflix as you neurotically rock back and forth during a silent panic attack, YouTube, and other, similar new media platforms have been the few industries to remain unaffected by the pandemic; a reliable and safe means of creating consistent content to keep people entertained by the millions.

If you’re an online creator that isn’t an awful, racist human down to your very core, you’re pretty much untouchable. Kind of. YouTube is an industry that is essentially both recession, and, more recently it would appear, pandemic proof in comparison to traditional media. In the last year, we’ve even seen YouTube creeping into the arena of mainstream entertainment in the form of KSI and Logan Paul’s boxing match.

However, YouTube still has one common enemy with the rest of the world that it is yet to destroy: the scourge of the Old White Man (a title derived from the Greek term The great Adamas, roughly translated as the indestructible metal man).

I’m from a background more cemented in traditional media, and having spent most of my life doing bits and bobs in the world of film and TV, I have had lots of unfortunate experiences with the Old White Man. The Old White Man runs most of the entertainment industry; they love to play gatekeeper, and, as we’ve seen highlighted over the last few years, they also love to wield their power in genuinely repulsive ways. It would make sense then that these gatekeeping bogeymen would have an inherent dislike for YouTube, since new media essentially bypasses the sexist, racist, and downright elitist systems that exist within traditional media. YouTube is the closest we have to entertainment made by the people, for the people.

You can identify the resentment the Old White Man has for new media by watching literally any instance of a YouTuber appearing as a guest on any mainstream talk show: ‘SO what is it you do exactly? hA hA!’, ‘Billions of views? How do you manage that then you talentless hack?!’, ‘Your fans are a bit mental aren’t they?!’, ‘How much money do you make? Go on, tell us!’ You will never see any other instance of a talk show host actively insulting and questioning the foundation of a guests’ profession. Imagine the outcry if Conan had asked Ariana Grande how much she earns before tax and then insinuated that her music was crap and undeserving.

You know what, I get it. These traditional, Fallon-esque men of late night entertainment have spent years climbing the aforementioned depressing and unrewarding ladder of show business, and seeing a nineteen-year-old YouTuber chilling in his holiday mansion will inevitably result in some petty resentment. But where exactly does that resentment stem from? Why is a YouTuber’s success any less earned than that of someone in traditional entertainment? Daily uploads and the constantly changing ecosphere of YouTube also comes with its challenges and physical strains.

Resentment from the Old White Man may also stem from the fact that he has tried and failed several times to make his own YouTube based content. See the excellent video by Film Theory: ‘Hey Fallon, You're Doing it Wrong!’ Of course, like many things the Old White Man doesn’t understand, he decides to vent his frustration by declaring a hate for it.

Sure, you might not be the biggest fan of pewdiepie, but YouTube isn’t home to just one form of content. That’s the beauty of it. You can enjoy anything from well produced, funny internet shows like Cold Ones, to genuinely insightful and entertaining video essays produced by Lindsay Ellis. Like traditional media, YouTube and online content covers a spectrum of different genres of videos, and to write off the entire medium because of one or two individual creators is a dummy dumb head move.

The only true difference between YouTube and traditional media is the form that the content takes and those making it. I think it’s time to start taking YouTube and its new media approach more seriously as a legitimate form of entertainment; as a graduate, it has offered me work and stability during a period where traditional media is either shut down completely or offering the embarrassingly brazen opportunity of unpaid internships during a literal pandemic.

Traditional media needs to stop listening to the Old White Man and shunning its digital cousin, because quite honestly, it could learn a thing or two.